Decontamination of Steam Generator Pipe Ends at SONGS U3 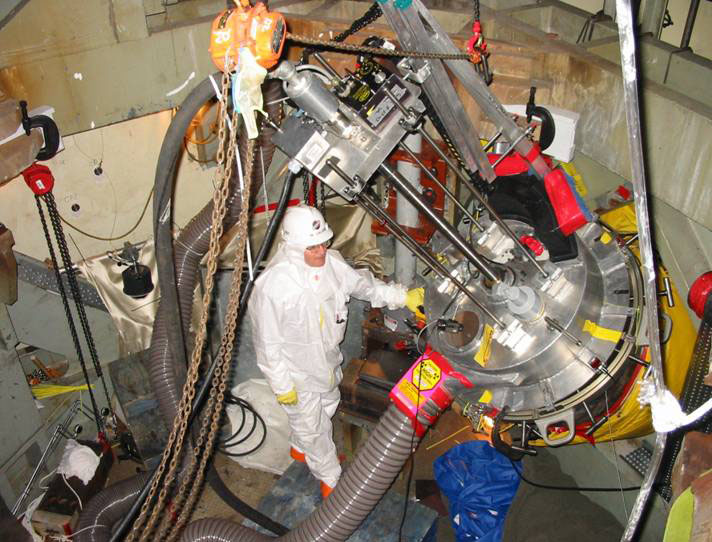 SONGS Unit 3 is a PWR nuclear station that underwent a steam generator replacement project during the fall of 2010. The NuVision decon team mobilized to San Clemente, CA to perform our sponge abrasive decon process on the hot and cold leg elbows for each loop. The NuVision sponge abrasive decontamination system operates on a simple, non-recycling process: the sponge media will be blasted into each elbow via a media delivery unit and a blast head. A seal dam is inserted in each elbow to prevent media from entering the Reactor Coolant System (RCS). The media is removed from each elbow after blasting via a portable HEPA vacuum system and is deposited into 55 gallon drums. The blast pressure, media feed rates, and nozzle rotation speed on the blast hopper and blast head are balanced with the vacuum pressure of the HEPA filtration system to maintain a slightly negative pressure within the pipe end /blast housing area. The negative pressure environment assures that our blast process does not create the potential for airborne contamination inside containment when we are performing our decon process. The decon system automatically stops blasting in the event the negative pressure inside the elbow approaches zero.

This was the 34th successful Steam Generator Replacement decontamination project that NuVision completed.

NuVision Engineering is a subsidiary of Carr’s Group plc, an international leader with market leading brands and robust market positions in Agriculture and Engineering in 50 countries around the world.
Go to Top